In a letter to SS-Obergruppenführer Artur Phleps , Himmler said
My goal is clear ,the creation of two territorial corps one in bosnia the other in Albania .
These two corps,with the Division Prinz Eugen,as an army of five SS Mountain divisions are the goal for 1944

clearly Himmler saw positives in expanding and developing an strategy for future Balkan Muslim SS expansion even with the raising,training and combat record of Handschar seen as a mixed affair the need for more troops to meet the threat from his Tito and JANL forces could be met with local territorial troops this would then negate the need to find more German troops to combat the growing Partisan threat and also act as a barrier for Germanys raw material sites in Yugoslavia
The Bosnian corps would be made up from SS-Handschar and the soon to be Kama ,Other divisions were to be rasied from Yugoslavias southern Muslim neighbour Greater Albania

Part of the Ottoman Empire for fine centuries Albania declared independence in 1912 after the First Balkan war . During the Paris peace Conference of 1912 American opposition defeated a plan to Divide Albania among its neighbours, turning to Italy for assistance in maintaining there independence .
Once Mussolini came to power Italian interference in Albanian affairs grew ove the next Decade , inspite of the eforts of the Muslim king (king Zog) who had come to power in 1928 once Albaina had become a Monarchy .
The Kingdom was annexed to Italy in 1939 when Italian Troops occupied Albania and king Zog was overthrown
After Germany had to intervene in Italys attack on Greece and in the process had to occupy Yugoslavia it was planned to dismember Yugoslvia and st up puppet regimes in Cerbia and Croatia ,part of this process they would create a greter Albania by transfering Kosovo-Metohija region of Serbia, along with southwest Montenegro and southern Serbia to Albania

The Germans During the occupation of Kosovo-Metohija recruited a local paramilitary police force of around 1000 Kosovar-Albanians with a similar number in Vulnetara an Albanian Paramilitary force these units assisted in the ethni§c cleansing of Jews ,Serbs, gypsies and other Non Albanians and non Muslims
The Germans and the Italians activly encouraged Albanian nationalists Balli Kombetar ( National Union or BK) to think of Albanian -Kosivo as part of Greater Albania

Himmler and the Albanian SS

In the september of 1943 following Italys Surrrnder to the Allies Germany occupied Albania Himmlerwished to use Albanian man power to rase two Waffen SS divisions using anthropological studies carried out by the Italians it was clamrd that Ghegs the people of northern Albania and kosivo-Metohija were if fact Aryans so from this the 21 st Waffen Gebirgs Division der SS Skanderbeg (albanische Nr.1) was formed in the April of 1944

As with Divisions the an experienced cadre must be used to build upon,so buy using a cadre of trained men transferred from Handschar as well as members of Reichdeustche and Volksdeustche from SS-Prinz Eugen to weaken Handschar even more a order on the 1 May 1944 was to transfer the 1st Battalion of the Handschars 28th Mountain infantry regiment to SS Skanderbeg, the 1st Battalion was made from primarily Kosovan Albainians
of the 11,398 potential recuits only 6,491 Albanians were finally accepted into SS Skanderbeg with two-thirds of these men from Kosovo and most of them were from the Sunni and Bektashi sects of Islam

Skanderbeg was rasied to fight the growing partisan threat from Tito and his JANL its first action the Albanian SS fought north west of Pac at Mokra Gora ,Hadzovici and Algina only the cadre of the unit had more than two months training ,short on man power and equipment Skanderbeg achived very little , it is with out supprise that numbers of them started to desert from the start they were prone to committing atrocities against their traditional enemies the serbs

The beginning of October 1944 the division was reported to be only 4,900 men and of that only 1,500 were fit for combat and the majority were from the German cardre personnel with around 500 of these beaing Albanians added to these numbers were some 3,800 Krigsmarine personel based on the Aegean coast it was at this time the division was moved to the capital of Macedonia Skopje to meet a threat from the Red army
It was here that the Krigsmarine personel were to be given infantry training ,OKH at this time realised that Skanderbeg was finished as a fighting formation with over 3,500 desertions tales of atrocity and no real combat record to speak of
So one the 1 November 1944 after 6 months the 21st SS Mountain Division Skanderbeg was disbanded in Pristina those Albainan Muslims left were released from service

Re: Order of Battle SS Mountain Div Skanderbeg and History

Probably the most known member of the Division, atleast most synonymous.

Same machine gunner in a ditch during a break or something. 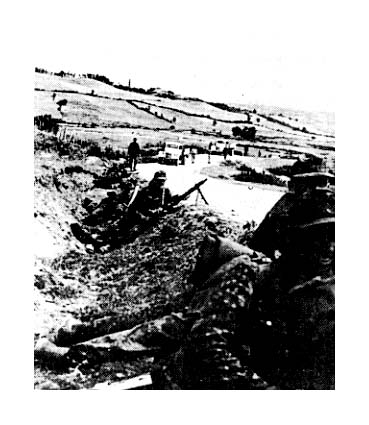 Skanderbeg and Kama got a pretty good deal of M44 dot uniforms.

I wonder if Skanderbeg would've done better as a regiment under Handschar, 23.SS-Kama could've been just another Kampfgruppe, dont see the need to branch off and make many more colorful divisions with different leadership. Keeping all the willing foreign volunteers in one place during the mess of 1944, would've been the best plan for the Germans. You could keep a better eye on desertions.

I dont know much about Skanderbeg, but judging from the only available pictures, you can tell it was supposed to act like a stiffener, between all other Albanian pro-Axis para-military groups.

I'd like to see something about the 24.SS-Karstjager, nobody seems to re-enact it.