Well, not me, but still my uniform. Should be a SS-Sturmmann during the Battle of the Bulge.
I'm planning to go outside and take some photos as soon as possible. Sadly there are no groups in Switzerland.

Question: What is the correct color of the belt buckle in this case? I'm going to paint it right now.

Here's one of me as a Volksgrenadier in the Ardennes (photo taken in Steinbach, Ardennen. December 2014)

RE: SS buckle, non painted is perfectably acceptable as they did not receive theirs pre-painted like the Heer as far as I'm aware. 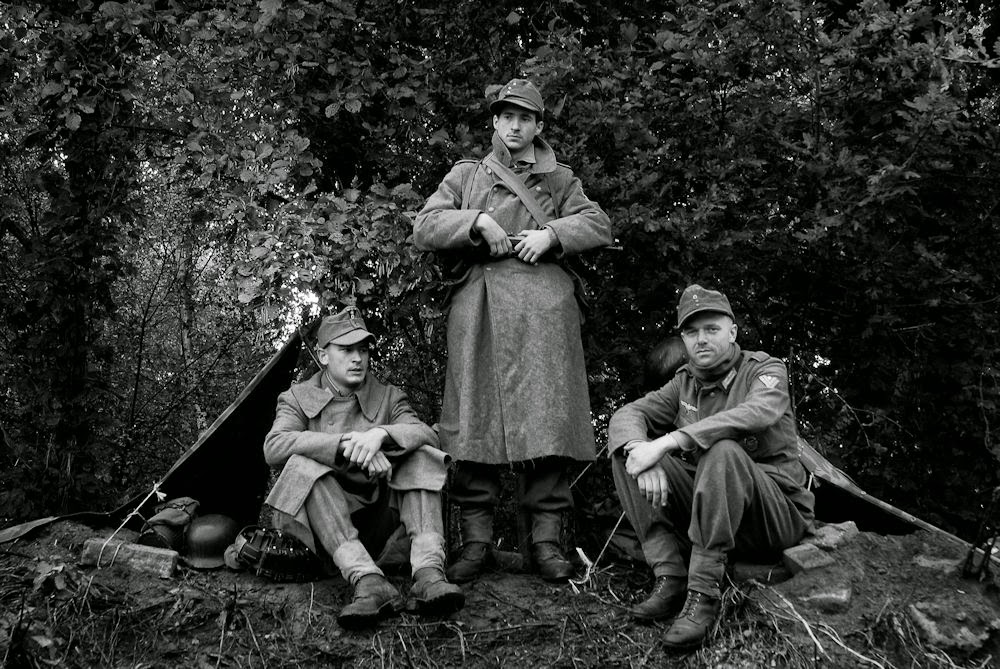 Me(middle) and 2 other members posing for a photograph. This event we dug foxholes and ofcourse spend both our days and nights in them.
3./Pz.Gren.Rgt.60 - Der Windhund
Top

German Kriegsberichter des Heeres (my impression) taken captive by the Soviets on the outskirts of Koenigsberg in Eastern Prussia (January 1945). One more from the same shoot

I would strongly urge you to look at lots of FJs with nets on their helmets- I have never seen any photos to my memory, that have the clips like yours on them. I know too, many vendors sell these and say they are good for the war time period. I also see guys in the unit I am with wearing them. But the helmets books don't support this. In my opinion, an allied "captured " net is far better, as there are lots of them in photos, a chicken wire net, or the nets sold by various people, one is on this forum, Warhats.

Who made you smock?

It's a postwar Bundesgrenzschutz net, not suitable for WW2 reenactment

Damn, I bought one of those nets too.

Anyways, here are some pictures of a spontaneous photo shoot. Maybe the weather was a bit "too" nice.

Yes, this net on your para helmet is post-WW2 and therefore unsuitable. The same applies to what it looks like German Bundeswehr jump boots (though I am not quite sure), there are good replicas of German FJ jump boots, either first model with side-lacing, or the second one with normal front lacing. I know it might sound very purist of me, but for a typical FJ impression you should replace Heer Y-straps with Luftwaffe issue, they are slightly different in design. Also LW leather equipment was typical by its brown color finish, it was not usually blackened on the surface as Heer stuff. Of course, I am aware of the fact that later in the war, and especially when FJ were fighting as regular infantry for a longer period of time, their equipment would include more and more Heer equipment parts (such as belts, ammo pouches, canteens, even helmets or boots). But again, for a typical FJ impression, these are a bit out as FJ had their own distinctive equipment and weaponry.
I hope my critique will be taken as objective, because it was intended to be such. Thumbs up!
Kriegsberichter des Heeres Obfw. Markus Moeschke> http://www.moeschke.estranky.sk/

Just a quick point on your first photo mate. The gaiter on your left leg is visible. You have the fastening straps on the inside of your leg. they should be on the outside. Straps point to the rear as you have. You just need to swap the gaiters over.

Thank you, Soest. I didn't know this was important.

If there's anything else wrong with those pictures, let me know.
Top
Post Reply
3416 posts