Swap information and ask any questions about an impression.
Post Reply
48 posts

For some time ive been interested in doing a pioneer impression, those big pouches and shovels seem to be my thing.

For the moment i'am just an ordinary SS grenadier but what bits of kit and uniform would i need to procure for this impression, suppliers? as all ive seen is USA companys making this stuff although sof did incorrect green pouches i think.
As said ive seen the large shovel and pouches+backpack although as far as i know this was issued with a 1 in 4 ratio.
Would one man have a set of the pouches and the other carry the large shovel? of would all of them had the larger shovels?

What colour of waffenfarbe was for the pioneers?

Does anybody have any links to online material i could read up on?

Lots of questions i know but ill be happy for any answers!

Had a piccy in my collection here:

The bags were issued as and when they were needed, they were not a personal issue item.

How would the waffenfarbe work on the black SS shoulder boards? Would it just be completely black?
How was the equipment laid out in a 10/11 man squad? wirecutters, shovels, saws etc who had what and how many?
Just trying to get a good idea of what i should get, early war they didnt have the assault pouches so was there anything they had before that?
As far as i know they had explosive charges 1kg/3kg (http://www.alleramilitaria.com/aweb_site_013.htm, think i saw some repros on a website (yank one) they looked to be made of card with a large label, would you have the dimensions or even a copy of the labels? Being unable to use any photoshop type programs i cant make much myself (might be a teenager but i'am still rubbish at it

So for starting off other than basic infantry fieldgear, what should i get first to add on? large shovel? wirecutters?

Sorry for so many questions at once

von papen wrote:How would the waffenfarbe work on the black SS shoulder boards? Would it just be completely black?
How was the equipment laid out in a 10/11 man squad? wirecutters, shovels, saws etc who had what and how many?
Just trying to get a good idea of what i should get, early war they didnt have the assault pouches so was there anything they had before that?
As far as i know they had explosive charges 1kg/3kg (http://www.alleramilitaria.com/aweb_site_013.htm, think i saw some repros on a website (yank one) they looked to be made of card with a large label, would you have the dimensions or even a copy of the labels? Being unable to use any photoshop type programs i cant make much myself (might be a teenager but i'am still rubbish at it

So for starting off other than basic infantry fieldgear, what should i get first to add on? large shovel? wirecutters?

Sorry for so many questions at once

What's your email? I have some info for you

Email sent in pm Feldjager! Thanks for the help guys it is appreciated, i found this site sells post war shovels, from the pic above it seems they're they same (other than colour which i can paint over) although i aint too sure about length wise
http://www.surplusandadventure.com/shopscr2588.html

and regarding the pouches, do you need the the backpack or could i just make do with the sof pouches on their own?
plus how would you carry the shovel without the backpack?

Wrote down the name and number of the book so i'll see if i can get it ordered in tommrow, thanks Franz!

I was a member of the SBG's pionier zug when it started off approximately 5-6 years ago and obtained most of the kit. I'm in the Aufklarungs section nowadays but still possess everything I collected.

I also had loads of pics and info downloaded onto my PC as well but this was lost recently when I had to re-format the PC. However, I can help you with lots of info as I still have most of my kit, uniform and insignia.

The demolition pouches were very interesting, particularly when I had to search for and collect all the little bits of kit that went into the leather pouch.

Btw, are you going to re-enact W-SS or Heer Sturmpionier? there is a difference with insignia but not as such with the kit itself.

Btw, I have an original pionier shovel along with with one of those green post-war ones. There is a definite difference when they are matched together. The postwar ones resemble a slightly curved vehicle spade more, whereas the originals are flatter.

The amount of kit you can collect is virtually endless, from a FW41 Flammenwerfer (which I possess) to the smallest fuse and fuse box for demolition charges.

I would suggest that you structure what you wish to initially represent and then collect to reflect that, i.e. correct uniform and webbing (to reflect your chosen role) to begin with.

Do you wish to portray early (as pictured above) or late war, W-SS or Heer, demolition layer, FW or rifle support, a wire cutter, grenade support, etc, etc. By all means collect as much as you wish to but make sure your impression looks correct to begin with and not an untidy hotch-potch.

Some of the bits can be expensive and fiddly; the bakelite fuse holders are getting hard to find now - I've got about a dozen of them but I ended up making resin copies as they tend to get broken when being carried about. The exploders are also getting expensive - £450+.

I occasionally still do drag my pioneer kit out, though I've aimed at regular pioneer rather than the assulat type. The main item I use is a 1940 pattern portable demolitions kit (contained in the same case as the fu d2 radio). A few of the bits of kit I reproduced are below.

I'll probably be going for early/midwar waffen SS pioneer, could you explain the different roles? the rifle support or FW and grenade support?
What are the differences in the insignia?

Good sir Pionere used standard SS insignia and SS uniform ,as for trade badges Pionere do have there own 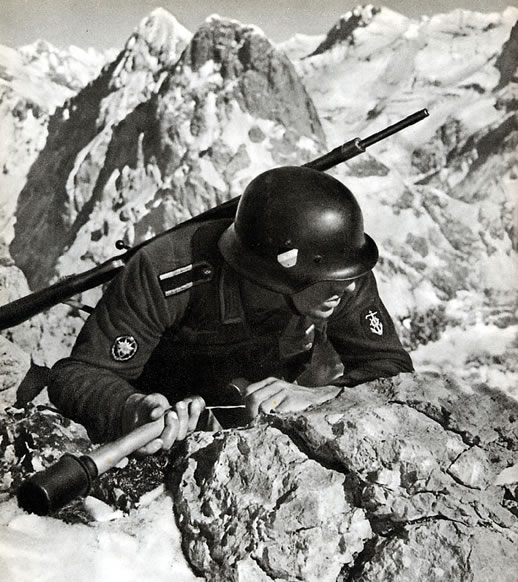 Note on his left arm the Steuermann or boat coxswain this badge is for those who have completed the corse in motorboats and military pontoons.The SS wear this on the lower left sleeve this is a Heer Pionere by the way

SS Pionere at work from Nord
Try this link to a US Reenactors site the do wiking Pionere http://www.wiking.org/
Link added

Top photo is of my pionier field grey parade uniform. Please note the black waffenfarbe around the edge of the eppaulettes and on the crusher cap.

The bottom photo is of the left sleeve of my tunic. You'll notice the pionier trade patch (incorporating a Gothic 'F') above the LSSAH cuff title. The W-SS had black diamond trade patches with silver thread motifs, whereas the Heer had circular trade patches which had a green background with yellow motifs.

The assault packs usually consisted of two bags carried, one on each hip (these contained a gas mask, K98 ammunition clips, 3kg and 1kg charge explosives and assorted sundries.) Also carried with these was a backpack which contained further explosives (3kg and 1kg charges) and a canteen in the top compartment.

Other items of webbing worn by Sturmpioniere consisted of hessian grenade bags (containing HE and smoke grenades) and assault and demolition packs. These were either leather or canvas bags carried over the shoulder.

The leather demolition pack, for example, contained all sorts of useful items and tools including scissors, crimpers, wire, fuses, black tape, a lock-knife and a special tool that resembled something like a cross between a bicycle spanner and a bottle opener. the canvas pack usually contained explosives and charges.

There were those who were issued with Flammenwerfers, the most common being the double cylindered FW41, for instance. Others may have been tasked with the pole charges that were dropped on top, or poked into, installations and emplacements.

As you can imagine, not all the pionier soldiers carried every piece of equipment, they all had their individual designated tasks and appropriate equipment.

The above is a quick precis, but I will have to find my documents that explains matters more deeply and in greater detail.

A slight word of warning though, if you intend to collect most or all of the above then you will find it very expensive indeed.
'Heia Safari' Facebook group page: https://www.facebook.com/#!/groups/341661532588540

Thanks for the pics guys keep me coming, and i should be getting that book in afew weeks time!

Thanks My Dear Schäfer Saved me the job of wrighting that out. Here is a photo of SS nord Pioniere Moving forward with Rubber Boats

Other equipment 1 hand sled with hand grenades ,explosives and pioniere
equipments as required by the mission
So as you see that the Equipment can change from role to role for the pioniere

Did all pioneers have the trade patch and (although quite a broad question) what do you think i should purchase first?
I was thinking the offer sof have on the grenade bags and 6 m24 grenades for £55 and perhaps wirecutters?
http://cgi.ebay.de/Drahtschere-der-Wehr ... dZViewItem

Would these be acceptable and where could i purchase the pouch, i haven't seen any were that sells one.

Return to “Questions, Tips and Tricks”